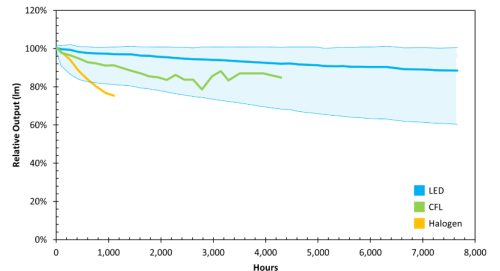 The Retail Lamp 3.2 report is a follow-on to the photometry tests of a variety of retail LED lamp types first documented about one year ago. The new research is based on testing of the A-lamps from that original retail lamps report. Between these two reports, the DOE published Retail Lamps 3.1 focused on dimming, flicker, and power quality of A-lamps.

The long-term testing was performed on ten samples of each of the 15 LED lamp models and the two benchmark lamp models. The lamps were operated continuously with temperature maintained at 45°C. The PNNL recorded measurements weekly on all of the lamps.

The CFL and halogen benchmark lamps failed catastrophically as you might expect before the 7500-hour tests were complete. None of the LED A-lamps failed catastrophically. Three of the LED lamp models delivered excellent 99% average lumen maintenance. But two of the lamp models exhibited average lumen maintenance below 65% — considered a parametric failure by the DOE. Another model exhibited substantial color shift and was also considered a parametric failure.

Perhaps more significantly, the report revealed that seven of the tested models had suffered sufficient degradation at 6000 hours, so the DOE judged those models unlikely to meet the 70% lumen maintenance over rated lifetime threshold set by Energy Star. Typically, the rated life of LED A-lamps is 25,000 hours.

The average lumen maintenance performance of all of the LED A-lamps looks very good, as you can see in the nearby graph. The shaded area shows the range of LED lamps performance, however, and the CFL and halogen products both performed better than some of the LED lamps prior to catastrophically failing.

In terms of chromaticity maintenance, the LED results again look very positive on average. But the range of LED lamp performance was huge. Still, there were relatively few LED models that performed so poorly. The benchmark lamps arguably outperformed the LED lamps on average over the useful life of the legacy sources, although the average LED results are plenty acceptable for the retail market and the best LED products had virtually no chromaticity shift over the duration of the tests.

The test on the A-lamps was very much like the PAR38 lumen and chromaticity DOE testing that we covered recently, although the PAR38 lamps were tested for an even longer period. The DOE compared the two sets of tests and found little correlation in performance in lamps from the same manufacturers in the two datasets.

The A-lamp testing is, as the DOE pointed out, not directly comparable to real-world usage with on-off cycles that can lead to catastrophic failure. Moreover, the report notes that the lab did not use the test procedures or methods defined in the LM-84 standard for lumen and color maintenance testing or the TM-28 standard for projecting long-term lumen maintenance. The DOE tests were begun before those standards were complete. So the DOE data is not directly comparable to data gathered or presented by lighting manufacturers based on those standards.

Finally, remember that all of the lamps tested were purchased back in 2013. LED and retrofit-lamp designs have improved considerably since then. And some of the tested products aren’t even on the market at this time. The report is useful in drawing general conclusions about LED A-lamp performance but not as a comparison shopping guide. You can peruse the full report on the DOE website.

*For more information go to www.ledsmagazine.com